In which Martyn gets drunk and he and Gerrod discuss the 2012 films, The Sweeney and, Dredd. 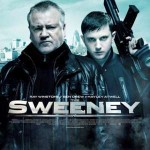