I’ll admit to being sceptical when I first heard the news that Mark Gatiss and Steven Moffat were adapting Sherlock for the 21st century. But, it worked. Sherlock was easily the best thing on the television in 2010. 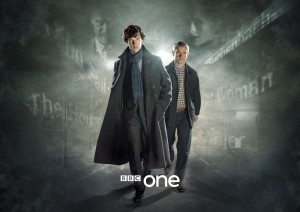 Episode one picks up exactly where the last episode left our heroes, by the swimming pool with Moriarty and covered with sniper dots.

Some viewers will be disappointed by the resolution, but I loved it, it was bold, funny, cheeky and slightly outrageous. Moffat and Gattis know the online forums will be buzzing after this.
The relationship between Sherlock and Mrs Hudson is explored a little more and shows just how much they mean to each other. The already great cast has got a new addition in the form of Irene Adler, played by Lara Pulver. Pulver puts in a fantastic performance as Irene and provides the female counterpart to Sherlock.

This is a really great episode, the text effect is still being used but this time it’s accompanied by some excellent camera work to help give us a little bit more insight to just how Sherlock views the world. I’m going to stop now, as I don’t want to give anything away.
I’ve added some lines of dialogue underneath, don’t worry about spoilers, out of context they won’t give anything away

“The iceman and the virgin”