When we last saw Woody and the gang last year, it was 1986; their lives had turned upside down. Lol had just killed her father, after he raped her best friend and was pregnant by Woody’s best mate, Milky. 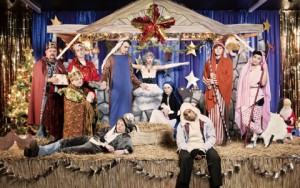 As you may have guessed from the title, it’s now two years later. Lol is a single mum battling guilt and depression, whilst Woody is in a self-imposed exile from the group, spending his days at work and his evenings playing charades with his parents and new, posh girlfriend. Milky has just returned from a three-month trip away. Shaun is now a budding actor and has fallen for the middle-class leading lady, of his play. The social awkwardness between the working-class character of Shaun and his middle-class love interest feels authentic, the encounter at her parent’s house, when he thinks the olives are grapes, is funny, yet touching.

If there’s one thing Shane Meadow’s does well, it’s drama. The characters are so well written, that you’re completely captivated by them. You sympathise with them. I can’t wait for tonight’s episode

This is England is a 3-part drama airing on Channel 4.

Catch up on 4OD