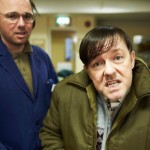 Before people had even seen this, they were lampooning Gervais for “playing disabled”. Yes, Derek isn’t smarter than the average bear, but neither was Baldrick, Mr Bean, Homer, Trigger or Father Dougal, were any of these characters mocking disabled people? Derek’s innocence isn’t the subject of ridicule.

Derek is a sweet caring and kind man.
To say this isn’t the funniest thing Ricky Gervais has produced would in no way be a criticism. What we get instead is a touching heartfelt drama about Britain’s forgotten.

The only moments the script fails are when it tries too hard to be funny. The script actually works best during its tender moments. Yes, the show wasn’t perfect, but aside from Being Human, what pilots have been?