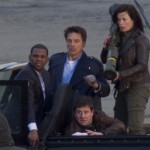 Each incarnation of Torchwood has been dramatically different from the last. Series one started out on the digital channel, BBC3, series two was moved to BBC2 and series three was promoted to a prime time BBC1 slot. So where do you go for series 4? Well, to America. The new joint venture between BBC Worldwide and Starz is a thing of beauty. It’s Torchwood with the budget Torchwood deserves.

The tone this time around is slightly different – it’s not as dark as series three but isn’t as fluffy as series one and two. This is good old fashioned BBC drama that happens to have a sci-fi theme. It raises huge moral and social questions.

The pace is fast and very action-packed and the culture clashes between the US cast and the Welsh cast provide the funniest lines of the episode. The action really kicks off as soon as Jack arrives. It does, for a while, focus mainly on the US cast but that is understandable as this is series one for the Americans and series four for the UK. Don’t worry, it isn’t long until Jack, Gwen and Rhys are in full frame. The new cast adds so much; Bill Pullman is on fine form as the convicted child molester Oswald Danes. Bill plays the role with an understated menace, which makes him extremely creepy. He puts a pause in the right place and it sends shivers down your spine.

The theme tune and title sequence have been changed and they work well, as does Murray Gold’s musical score throughout, setting the tone of each scene perfectly.

Episode one leaves you wanting more and from the series trailer we were shown, we’re in for a good ride. I’m only worried about where they can take Torchwood after Miracle Day – the only logical place would be a movie, which would be welcomed with open arms.