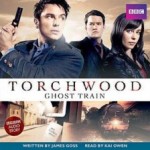 It’s been too long since our last instalment of any kind of, Torchwood. So this release was welcomed with open arms.

Ghost Train is written by James Goss.
Goss has already written a few novels for both Doctor Who and Torchwood, he wrote 2009’s Torchwood’s audio play, the Golden Age.

Ghost train is a first-person narrative, It’s set between Series 2 and Children of Earth.
It’s centred around Rhys Williams so Kai Owen reads this story.

Kai has a great voice for audio.
The reading is very clear, even while he is imitating the voices of the other characters. The sound effects and music work well and add real atmosphere but don’t distract from the speech.

The story starts out about missing fridges but then it gets complicated. It centres around a train pulling into a station late night/early morning, years after the track has been abandoned. For the 2 weeks, previous many strange things have been happening. Radios telling people to kill.
SatNav’s telling drivers to run people over. And it all has something to do with that train. The train is coming from a world that has just recently been destroyed and now what’s coming from that world, is coming to this one.

I absolutely loved this story, Its a 2 CD set, at just under 2 hours and 20 minutes. Honestly, it could have done with being slightly longer.
It’s funny when it has to be funny, it’s gripping when it needs to grip and it doesn’t feel like 2hrs and 20mins.
Kai manages to capture the essence of every character, extremely well, especially Ianto, he nails Gareth David-Lyod’s dry wit, and speech perfectly. He captures Gwen and Jack pretty well too.

Like the previous Doctor Who Audiobook, it is also split into chapters for ease. It also contains the £5 off your first purchase code. Like all other Torchwood Audiobooks, this should be considered canon.