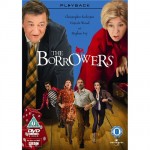 The Borrowers are Arriety Clock (Aisling Loftus) Pod (Christopher Eccleston) and Homily (Sharon Horgon) they are a family that lives under the floorboards of James Millman’s house. James is having a rough time. His mother has recently died and they’re in the middle of a recession, which has forced James and his father to move in with James’ Grandmother (Victoria Wood). The grandmother has contacted a Professor (Stephen Fry) and alerted him to the Borrowers presence, the family, are then forced to go on the run with a fellow Borrower and tour guide, Spiller (Robert Sheehan).

The one to look out for is Aisling Loftus her Wide-eyed naivety/ enthusiastic take on Arrietty is believable and sweet. I predict big things for her in the future.