I’ll confess, I am a HUGE fan of Primeval. I’ve watched every episode broadcast. It’s true that the show has never been on the same l 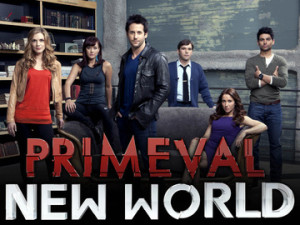 evel as Doctor Who, but it’s always an enjoyable ride and I’ve admired the creative team behind it, they’ve had to deal with four different leading men over five series’ that can’t have been easy. So, the idea of a Canadian spin-off intrigued me a great deal. A show I love, with a budget it deserves. It’s just a shame that this is such an awful mess. The concept is the same, space-time “anomalies” are opening randomly and spitting out prehistoric/futuristic monsters into the modern-day.

Remember, this is a spin-off, not a remake. Space was granted only the idea for the show, not the remake rights. So, they couldn’t remake the first episode, but quite why they allowed this to be the episode they launched with is a mystery. Apart from a great opening sequence, which involves two base-jumpers getting eaten mid-air, in an attack you don’t see, it failed to grab my attention, I was checking Twitter, updating Facebook and doing just about anything to fill the hour. From what I can remember, our main character is billionaire software programmer Evan Cross (Niall Matter), his lab is essentially the ARC, from the UK series. Now, to be completely honest, I’ve forgotten everything about the rest of the team, I know there’s the clichéd grumpy-older military guy, a woman who knows something about animals and a British guy in a leather jacket. The team of pretty, but wooden actors later discover the existence of a dinosaur and treat it like it’s just a normal day at the office, even though this is the first time it’s happened to them.

Connor (Andrew Lee-Potts) from the UK series pops up now and then, speaking in code and riddles and hinting at a better episode happening just off-screen. Yes, he is essentially there to please fans of the original, but you’re not given a reason for him actually being there and I don’t believe he’s in any other episodes this series. A better approach would have been to make Connor the central character for episode one, with him actively setting up the Canadian branch, then passing the torch to Evan. This episode also contains the most boring action scene committed to screening, the team chase a flying dinosaur that we never see the fly.

I spotted the major flaw with New World about five minutes in, there’s no sense of fun. With Primeval you got the sense that everyone involved knew it was just a silly pre-pub Saturday night show, about dinosaurs. The spin-off somehow keeps the same premise, yet loses the element of fun that made the original enjoyable. With ITV and watch both incredibly tight-lipped about Primeval’s future, I’m afraid this is the best we’re going to get.