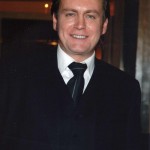 I was lucky enough to get an e-mail interview with Philip Glenister, to talk about his role in Sky One’s adaptation of Treasure Island.

Can you describe Captain Smollett?

He’s the captain of the Hispaniola and he’s engaged on sealed orders by Squire Trelawney [Rupert Penry-Jones] to sail the ship over to the island. The reason he’s on sealed orders is that Trelawney doesn’t want him to know that they are on a mission to nick treasure.

Initially, Smollett refuses to sail the ship on the grounds that he doesn’t know the crew and it seems like a bit of a dodgy setup, but then he is bribed by Trelawney and he doubles his money. So really he’s as bad as the rest of them at that point. But during the course of the journey, he becomes a sort of the moral centrepiece of the story.

What intrigued you about this adaptation?

Five weeks in Puerto Rico straight after Christmas basically, if truth be told! I jest. It’s just a classic story isn’t it and I knew that there was going be a decent budget to do it properly. If I’m really honest I thought this could be quite fun and maybe it’ll be something that my kids will be able to watch for once. Everything I’ve done they are too young to see, really. They see all the hype that goes with it but in this case, they can actually see the finished product. The only thing is I’ve got two girls, and this is all about pirates. I’ll just have to hope they can suspend their girly-dom for two hours.

How was the shoot?

It was fun but it was a tough shoot. Like all things, when you’re filming abroad, you know you’ve got a whole extra load of complications. We shot in Dublin before Christmas and then we had to change crew for Puerto Rico. That’s a tough one for everybody to negotiate.

How are your sea legs? As captain, you must have spent more time on the ship than most?

Oh yeah, in fact, I seem to spend a lot of time filming in boats in general since Mad Dogs. It’s written in my contract: I’ve got to work with big boats. Actually, a lot of the filming on the boat in Puerto Rico was stationary, but we did do one shot just off the pier, so we got to go out and do a sortie on the sailboat, and that was fantastic. I was pretending to give orders – I am supposed to be the Captain after all.

What did you make of the changes to your character from the book?

Do you know, I didn’t really pay it too much attention? I got the book, I started reading it and then I thought, ‘I know – there’s this thing called the internet. Thank you, Wikipedia! Captain Smollett, Treasure Island – images, Dong! That’ll do.’ What I do know is I’ve seen the Muppets Treasure Island, and it’s good. Kermit the Frog played Captain Smollett and he was my main inspiration!

How was your costume?

Not pleasant. All heavy fabrics, three layers, either too cold or boiling hot and incredibly uncomfortable. I hate wearing period costume. I don’t know how anybody won wars. I think it was the ones who got dressed quickest. And so many buttons – every time you sit down, they pop off. Drives you mad. And the most uncomfortable shoes in the history of shoes. Buckles are not my favourite thing.

He’s stalking me again, looking like a sort of cheap Puerto Rican Elvis! But here he gets to put on an RP voice and play an alcoholic. That’s a long stretch for him, on both counts.

Did you get any free time out in Puerto Rico?

We had a bit of time but it’s like anything abroad – really you’re there to work. Me and Rupert and Sean [Gilder], we did go out to do this bioluminescence thingy which involved kayaking up a mangrove swamp and out into this lagoon. It sounded fantastic but I think we got a bum night because it was cloudy and we missed all the fish and the lights. Some of the guys had a good time on it the week before and they were selling it to us big time. Bit of a letdown, I have to say.

Thanks to Philip for his time and, to Sky One for arranging interview.