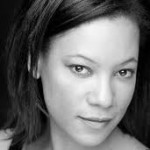 I was lucky enough to take part in an e-mail interview with Nina Sosanya, about her role in Sky One’s adaptation of Treasure Island.

What attracted you to this project??

I love dressing up! I’ve done a lot of Shakespeare and his contemporaries on stage, and I get to dress up in corsets and big wigs quite a lot for that. But on television, a lot of the stuff that I do is contemporary, where I’m wearing stuff from Next. This is just right up my street really and it’s a great adventure. The whole genre is incredibly romantic. It’s fun, though not in a Pirates of the Caribbean way – it’s quite dark, it’s quite earthy and I kind of liked all of that. I wish I could have played a pirate and I think Alibe is the next best thing.

Can you describe your character?

She is talked about very briefly at the end of the book when they’re talking about what Silver does and they say that he goes off with his ‘mulatto’ wife. She has no name and it’s about as much mention as she gets. I’m playing Alibe Silver who is that wife.

He originally met her in a brothel in Puerto Rico, so she’s an ex whore, who fell for Silver. He rescues her from there and they now live together as husband and wife in the Spyglass Tavern.

Sort of. What’s great about this adaptation is that these characters are real people in real situations, suffering through poverty and class mainly. Stewart [Harcourt, writer] has done a brilliant job in bringing the characters to life. So for Alibe, she’s stuck where she is because of her class and possibly her race, and her earlier profession. And she wants to get out of it as everybody did in those times and in the book. So she’s as wily and as canny and untrustworthy as she needs to be. She’s quite self-serving but it’s all about survival. She is deeply in love with Silver and he is deeply in love with her.

Can you describe her look?

The costumes were brilliant. They are what you’d expect in that they’re corseted and a bit bosomy, with big skirts, tight sleeves and a rather rich but faded fabric; but particularly with Alibe it looks like she’s made them herself from other bits of fabric. They’re very sort of broken down, rich but kind of filthy at the same time. Alibe’s also got a big wig, long, long hair which is always great for me and it’s all a bit grubby. The makeup is slightly grubby too, which is somehow quite sexy.

How was filming in Ireland?

My first day we were sitting on the coast in Cork where the Admiral Benbow Inn was, and everything was absolutely beautiful. This location was stunning: right on the cliffs, you could see the sea and it was poking out in the middle of nowhere. But of course, that meant the wind just blew everybody sideways.

The very first day I had to do a scene where I’m trudging up the coastal path, with bare and bleeding feet. I think it was -5°C or something horrible like that. That hurt. Another time we were at the end of a pier in a hailstorm with the waves coming over the sea wall and splashing the cameras. But I loved every minute of it: usually, you’re filming in terrible weather trying to pretend that you’re in 28°C and everything’s marvellous. Whereas for this they really used the weather: you can see the hail and you can see the greyness. I think it’s going to look wonderful.

You and Shirley Henderson are the only two female cast members…

Most of my career has been working with men! That’s the lot of the female actor, but actually, in this a lot of my scenes are with Shirley, which was amazing because she’s amazing.

Why do stories like this still feel relevant today?

It’s such a brilliant story because the whole world is there: you’ve got the people who are at the top of the pecking order still grabbing and reaching for anything that they possibly can and so is everybody right at the bottom. Then Stevenson puts them on a boat and then he puts them on an island – it just makes the situation worse and worse and worse. It’s like a social experiment that goes horribly – or predictably – wrong, a Lord of the Flies kind of scenario.

What was it like being Eddie Izzard’s onscreen wife?

Well oddly enough I have worked with Eddie before playing his ex-wife, on a television series called Kitchen and weirdly it was shot in Dublin, which was a bit strange. I found that I instantly got on with him. I’m a big fan of what he does but I didn’t expect him to be anything like his stage persona and he isn’t, he’s himself. But I think he was about as excited as you can be to be playing a pirate so we were both like kids in a sweet shop.

What projects do you have coming up?

The one I’m most looking forward to is Return to Treasure Island starring Alibe Silver. Well, you never know.

Thanks to Nina for her time and, to Sky One for arranging the interview.