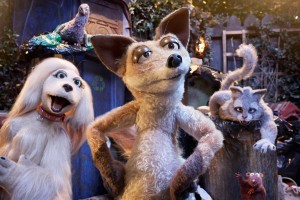 I’m a newcomer to Mongrels, somehow I missed the first series, which is strange as this is one of only a few shows worth watching on BBC3.

So, what’s Mongrels about?

It is a puppet-based show for adults, as a grown-up Sesame Street and is the closest thing we have in the UK to Family Guy.

The episode starts with a flashback to Nelson’s childhood where he witnessed his grandfather die during a fox hunt. Now an adult Nelson is in therapy. A former bully from Nelson’s school days turns up. The bully is dying and wants Nelson to put him out of his misery. Nelson reluctantly kills him and asks Marion to get rid of the body. Nelson and Kali share a psychiatrist who accidentally lets it slip. Kali spreads the gossip around the beer garden and Nelson is seen as a hero in the eyes of his friends.  Nelson is then recruited by a secret society of foxes that are planning to assassinate the four remaining dogs that were part of the hunts. Nelson is promised an iPhone and a £30 House of Fraser gift card if he completes the mission. Nelson tracks the four dogs down, but can’t quite bring himself to kill them, so he takes them back to his den under the pub.

What Mongrels excel at is the movie parodies and quick-fire out of the moment sequences that Family guy is famous for. The parody here is any Nazi hunter film that you have ever seen. The dogs speak in German accents and take their own lives when they think Nelson’s bunker is under siege.

The episode’s subplot involves Destiny being signed up to a celebrity dog walking service. She pretends to be Cuba Gooding Jr’s London dog and falls head over heels with John Terry’s dog. After John Terry’s dog turns her down, Destiny decides the only way forward is to treat him mean. John Terry’s dog is completely obsessed with her. Destiny then tells the other dogs to follow her lead, which they all do and this results in the dog’s trust. A passer-by sees the injured dogs and phones the Dogs Trust taking the dogs away.

The episode is genuinely funny. The flashbacks and Grange Hill references had me in stitches, the musical number that Destiny sings is also a genius piece of comedy writing. It’s safe to say that Mongrels has a new fan.