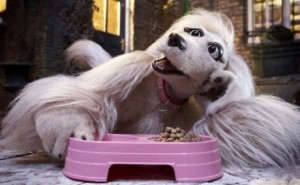 The main movie parody here is Shaun Of The Dead. Destiny is in heat and it has turned every local dog into a sex-crazed zombie. Nelson, Destiny, Marion, and Vince lock themselves inside the pub.

I didn’t really like the main plot involving Nelson and Destiny, that could be because I haven’t seen the first series. I didn’t quite believe that a fox-like Nelson would fall for a dog like Destiny. It felt forced as if it were crafted just to suit the plot of this episode.

Nelson is trying to date Destiny, Destiny is hungry and knows that Nelson has access to food. There is an amusing moment which was a parallel to prostitution and what she would do for a dog biscuit.

It was the subplots that I found most interesting. It is Kali’s birthday so she celebrates by eating a badger on the road. A rickshaw driver runs it over and she wants revenge. She decides that the best way to do this is to blow him up. She then realises that the rickshaw driver had a seven-year-old son and feeling guilty she hits the bottle. Well, a brandy filled straw.

She decides to attend his funeral, so guilt-ridden she sits on his coffin and confesses. However, the rickshaw driver was a bird lover. The widow and her son think that Kali is the reincarnation of the driver and are overjoyed to see her. Kali’s mood is then lifted and she flies away, hitting the son in the face.

It was great to see an aloof character like Kali realise the consequence of her actions. The writers managed to capture her depression extremely well, I genuinely felt sympathy the murdering bird.

Back in the pub Marion has discovered a karaoke machine and attempts to throw a party which doesn’t go to plan. Vince hogs the karaoke machine after he discovers it helps with his Tourette Syndrome. Seeing a character like Vince belt out show tunes was funny. It was nice to see a softer side of him, even if it was just temporary.

The pop culture references are great in this episode, as well as the obvious Shaun Of The Dead, there is a nice moment where Marion reveals he lived in a house with the Being Human characters. This included a cameo from Russell Tovey, which now means he has starred in all three of the only three shows worth watching on BBC3. Whilst not as laugh out loud as episode one, episode two raised more than a few smiles. I hope Mongrels clears up come comedy award season.