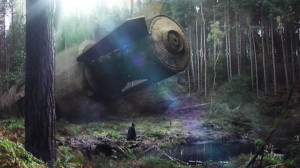 The podcast version of The Minister of Chance proved that quality audio drama on a grand scale can be brought into being by the sheer force of the masses of us who want it to happen. If you haven’t heard it and you’re here on Bad Wilf reading this, go check it out and tidy the flat with your earbuds in and your heart soaring.

Fan favourites Paul McGann, Sylvester McCoy, Paul Darrow and Tamsin Greig join class acts Julian Wadham, Jenny Agutter and Lauren Crace in a fascinating mix of cavalry and rocketry with a slightly darker tone than Doctor Who but with plenty of charm to match.

A short film – the saga’s introduction – was shot amid the gorgeous countryside and architecture of Britain and also made available for free, with donors getting a peek just a bit earlier.

Two nations brandish an odd mix of weaponry at each other in this world but the clearly more primitive nation in the struggle may not be as helpless as it seems. It’s in this pastoral nation of Tanto that The Minister of Chance parts the curtains of reality, revealing a shimmering ‘frost bridge’ into the unknown.

TODAY begins the Kickstarter to fund the first full episode. Why not tap a few credits into the hovering paypoint and take a seat by this bonfire? The tale told here will be thanks in part to you.