Doctor Who star Matt Smith and lead Writer Steven Moffat created their own piece of Doctor Who history today during their first visit to the Doctor Who Experience in Cardiff as their hand prints were immortalised in cement, 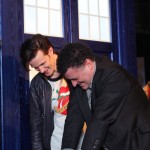 which will be displayed permanently at the new attraction. Matt Smith is the first Doctor to be immortalised in this way, while the fingers of the show’s Lead Writer will also be set in stone.

The casts were in addition to the unveiling of several new exhibits of the most iconic monsters and props from the recently broadcast series including the dress worn by new companion actress Jenna-Louise Coleman (Oswin’s dress and boots from Asylum of the Daleks), Grayle’s Chained Weeping Angel and The Cherub Angels (The Angels Take Manhattan) and the Robots and costumes of Solomon and Nefertiti (Dinosaurs on a Spaceship).

Matt Smith says, “It’s fantastic that the Doctor Who Experience has been given 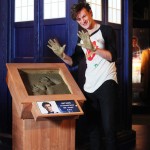 its very own purpose-built home here next to the studios and it feels like a bit of a spiritual home for Doctor Who. It’s been great fun unveiling some of the Doctor’s most fearsome adversaries from Series 7 and with the Christmas special and more episodes next year, there’ll be plenty more props to come down the line”.

On his hand-cast: “I’m honoured to have made my own little piece of Doctor Who history today. It’s a show with so much tradition over nearly 50 years, so to be the first Doctor to take part in something like this is really special”.

Steven Moffat says: “I’m very excited and honoured to have my hands preserved forever. And quite relieved they came back out of the cement! I now know, for all my future crimes, that my fingerprints are readily and permanently available.”

The Doctor Who Experience is the only interactive Doctor Who attraction in the world. It welcomed over 230,000 visitors during a one-year stay at London’s Olympia before moving to Cardiff in July 2012. Since opening in July, over 40,000 fans have passed through the TARDIS doors and taken part in their very own Doctor Who adventure.