Despicable Me grossed over $540 million in 2010 and became the 10th-biggest animated motion picture of all time. So, a sequel was inevitable. 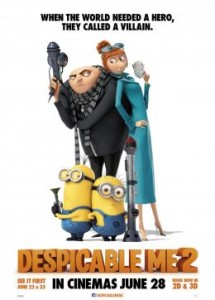 Set a year after the events of Despicable Me, Gru (Steve Carell) has settled in as a parent to his adopted children Agnes, Edith and Margo. Gru is a calmer character in this film compared to the 2010 film.

He uses his old Evil Lair, his chief inventor Dr Nefario (Russell Brand) and his Minions to produce jam. The film lacked the emotional depth of first film. But, that isn’t to say that it’s a bad film, I just felt a sense of déjà vu, it’s pretty much the same story, but with a love interest in place of the children.

It’s clear from the advertising that the Minions – those knee-high yellow Tic-Tacs, on a poster near you are key to the commercial equation of the franchise. So they swarm all over the place doing various child-pleasing routines in hard hats and beachwear, while Gru gets embroiled in an afterthought of a plot, involving a secret agent called Lucy (Kristen Wiig) who’s also, predictably enough, his love interest. Steve Carrel phones in his performance, with that not very funny accent.

It’s his co-stars that shine here, Russell Brand is once again brilliant in his role, as is Miranda Cosgrove. It’s worth stating that this cynical 30-year old isn’t the target audience for this, but children will undoubtedly love it. There were a few adult pleasing moments, a reference to Invasion of the body snatchers had me howling with laughter. If anything this feels like nothing more than a set up to the Minion spin-off, which is coming out next year. Fun, but forgettable it’s worth seeing in 3-D, for the end credits alone.