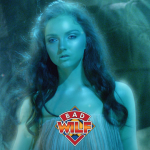 Martyn and Gerrod discuss Doctor Who: Curse of the Black Spot.

“The Curse of the Black Spot” is the third episode of the sixth series of the British science fiction television series Doctor Who. Written by Stephen Thompson, and directed by Jeremy Webb, the episode was first broadcast on 7 May 2011 on BBC One in the United Kingdom and on BBC America in the United States.

In the episode, the alien time traveller the Doctor (Matt Smith) and his companions Amy Pond (Karen Gillan) and Rory Williams (Arthur Darvill) land on board a pirate ship in the 17th century. The ships are terrorised by a Siren-like creature. After receiving an injury, however minor, a black spot appears on their palms and then the creature apparently disintegrates them.