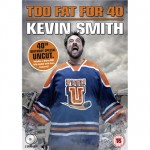 5, when my older cousin rented it from his local video store. Something about Smith’s movies and his sense of humour just speaks to me. I’m an avid SMOdcast listener and I look forward to every DVD release of his Q&A specials.

Smith is best when he’s on stage, he is a raconteur and it’s quite clear that he loves what he does. He’s confident, cool performer that truly appreciates his adoring fans.
Too Fat for 40 isn’t the greatest of Smith’s Q&A specials, but that doesn’t mean it isn’t any good. The tales he tells are sometimes heartwarming, but always pant wittingly funny. This special mainly focuses on the stress involved in directing the movie, Cop Out. During the Cop Out chat, Bruce Willis is Smith’s main target. The stories he tells about the actor are revealing and extremely funny.

There’s an “Encore” Q&A, which is just as good as the main Q&A. There’s also a making-of feature and a brand new intro.
If you’re a Kevin Smith fan or, just a fan of standup in general, then Too Fat for 40 won’t disappoint you.

Kevin Smith is touring the UK soon, check out smodcast.com for details

Too Fat For 40 is available from Amazon and Netflix.