For those unfamiliar with the hit E4 show, The ‘Inbetweeners’ are Will, Jay, Neil and Simon, four sixth form mate 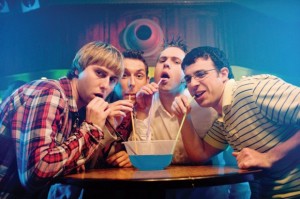 s who are not popular, yet not completely social outcasts. After three hugely successful series, it’s time for a big-screen outing. The movie opens with Jay completely naked, wearing a pair of snorkels, whilst watching pornography and doing something with ham that I couldn’t possibly comment on. His mother walks in on him and passes the sad news that his grandfather has just died.  With Jay’s inheritance money, our heroes decide to book a holiday to the Island of Malia.

What follows isn’t original, but it is extremely funny. The main plot involves the guys trying to get laid, falling out, making up and maturing. The film is pant wettingly funny, from start to finish. There are far too many moments of genius here, to highlight any one scene in particular. Seeing as this has now become the highest-grossing British comedy of all time, I doubt this is the last we’ve seen of The Inbetweeners.