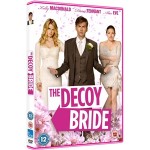 ) who is cracking under the constant pressure of media attention. She decides to flee to the fictional Scottish Highland of Hegg, with her famous, author fiancé David Tennant.  When she spots a paparazzi stalking the venue she runs away, leaving David Tennant standing at the altar. Her assistants decide to hire a stand-in (Kelly Macdonald) to put the press on a false trail until she arrives. David Tennant and Kelly McDonald accidentally, actually get married and the film turns in to another forgettable tale. It’s telling that I’m writing this exactly five minutes after the DVD and I can’t remember any of the character’s names.

It’s an ambitious independent film that is trying to be akin to something from Richard Curtis, but it fails quite epically. The plot is a mess and feels really drawn out, this could have worked as an hour-long TV special, but this really isn’t a movie. The performances are ok, but not great David Tennant is essentially playing The Doctor. Sally Phillips (who also wrote the movie) has a distractingly bad American accent, in fact. It’s the American character’s that are treated worst in this there is simply no need for them. They could have easily been taken out and it wouldn’t have affected the plot. The only person to shine here is Kelly McDonald, but that’s because, after two years of Boardwalk Empire, it’s nice to see her doing something that isn’t so serious. It’s a predictable paint-by-numbers rom-com, that I’m sure Tennant fan-girl’s will love.