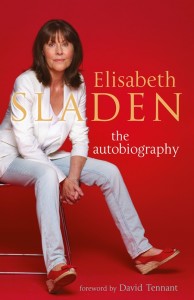 I can’t be critical about this book. Lis was a lovely, affectionate person who touched the heart of everyone she met and, everyone she didn’t. I remember hearing that she was going to be in the series 2 episode, school reunion. Despite never having seen an episode with Sarah Jane in, I knew who she was. Sarah Jane is the definitive companion.

Sadly, Elisabeth died in April 2011. Even now, a few months away from the anniversary, it still feels fresh and somehow unreal. It isn’t just the older viewer who has lost someone; it’s also the millions of younger viewers that knew her from The Sarah Jane Adventures.

The role of Sarah-Jane Smith is arguably her most famous. The book charts her early life in Liverpool, as well as her career on the stage, her break into TV and radio, her marriage and motherhood, and her return to the Doctor Who family, in 2006. Every tale is recounted in glorious detail. It’s easy to see how children have always been spellbound by Lis.

She is also warm and praising about her Doctor’s, although Tom Baker comes across slightly better than Jon Pertwee. She then praises her later Doctor’s, David Tennant and Matt Smith, as well as the young cast of The Sarah Jane Adventures.
This is a brilliant book, with a lovely message from her daughter and a foreword by David Tennant.
Russell T Davis summed it up best when he said, “The universe was lucky to have Sarah Jane Smith; the world was lucky to have Lis.”

Elisabeth Sladen: the autobiography, is published by Aurum Press and costs £18.99