Roughly 40 years ago, one Thomas Stewart Baker sat in the pub with his Doctor Who co-star, Ian Marter and started writing a Doctor Who movie, Doctor Who meets the Scratchman.

Ultimately, it never secured the required funding and the un-produced film became the stuff of legend. Tom Baker later had to apologise, after kids started sending their pocket money to the BBC. After he joked that fans could fund it.

Over the years, you’d hear a rumour here and there at fan gatherings and meet ups. Some people even claimed they’d read it. It sounded bonkers, the fourth Doctor going up against the devil and at some point, pinball would be involved..

Now, after years of speculation and “what ifs” Tom Baker- with the help of James Goss, has adapted the screenplay into a novel. 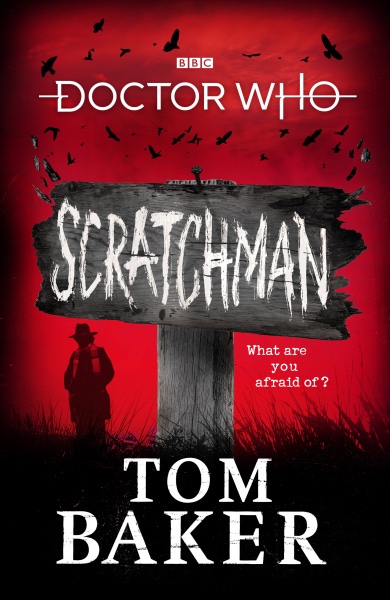 The Doctor, Harry and Sarah Jane Smith arrive at a remote Scottish island, when their holiday is cut short by the appearance of strange creatures – hideous scarecrows, who are preying on the local population. The islanders are living in fear, and the Doctor vows to save them all. But it doesn’t go to plan – the time travellers have fallen into a trap, and Scratchman is coming for them.

With the fate of the universe hanging in the balance, the Doctor must battle an ancient force from another dimension, one who claims to be the Devil. Scratchman wants to know what the Doctor is most afraid of. And the Doctor’s worst nightmares are coming out to play…

Baker and Goss have taken full advantage of the novel medium. There’s a sense of freedom here, that a film probably wouldn’t allow. The story takes its time and feels like the fourth Doctor era, but it’s also clearly influenced by the big sci-fi/horror films from the 70’s. Mostly John Carpenter’s work, but I also got hints of Wicker man and the Omen. This blend makes for an intriguing read.

The first half reads very much like a standard Doctor Who story, it’s the second half that gets whacky, outlandish and high-concept. I don’t want to spoil it. It’s a bit far-out and some may feel it makes the book a bit disjointed. But it worked for me.

This is the most fun I’ve had with a book for years. Tom Baker claims this will be his last time writing a Doctor Who book, if that’s true then he’s left us with an entertaining read. However, I’m hoping he can be talked into another.