On a windswept Northern shore, at the very tip of what will one day become Scotland, the islanders believe the worst they have to fear is a Viking attack. Then the burning comes. They cannot run from it. Water will not stop it. It consumes everything in its path – yet the burned still speak. The Doctor is just looking for a game on the famous Lewis chess set. Instead he encounters a people under attack from a power they cannot possibly understand. They have no weapons, no strategy, and no protection against a fire sent to engulf them! A thrilling new adventure starring the Doctor, as played by Matt Smith. 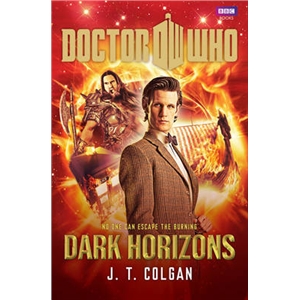 To celebrate the release of this book, we have a copy to give away! The book is due for release on July 5, the winner will be selected at midday on Friday 6th July 2012.

Follow @BadWilf and RT for a chance to win Doctor Who: Dark Horizons http://badwilf.com/?p=4159 #doctorwho

Terms & Conditions:
Entrants must be 15 or over. Contributors of badwilf.com and their families are not eligible to enter. Only one entry per person is permitted. The judge’s decision is final and no correspondence will be entered into. The prize may not be transferred to any other person. No cash alternative or alternative prize is available on entrant’s request, but in the event of the advertised competition prize being unavailable we reserve the right to offer an alternative prize of equal or greater value. Entry in the competition implies acceptance of these rules.