In July 2010, film news site Total Film accidentally tweeted the wrong date. As an in-joke, they mocked up a fake image of the time circuits.

Today, a new fake image emerged, making it appear that June 27, 2012 was the date that Marty and Doc traveled to the future. 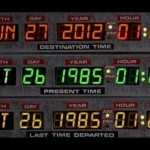 The correct date from the film is October 15, 2015. It seems people will blindly tweet anything.

Still, on a positive side mattel still have three years to develop hoverboard technology.