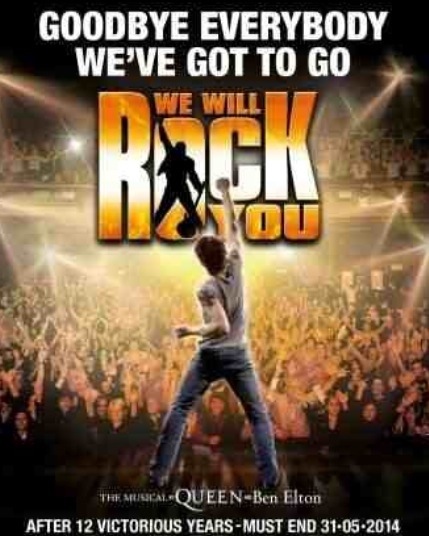 Having rocked over 6.5 million people in a record-breaking 12 years at the London’s Dominion Theatre, the smash hit Queen & Ben Elton musical We Will Rock You is due finally to close on 31 May 2014.

Now the longest running show ever at the Dominion by a margin of nine years, WE WILL ROCK YOU takes its rightful place in West End history, sitting proudly in the Top 10 longest running musicals of all time.

We Will Rock You has now been performed in 28 countries around the globe, and has been seen by a more than 16 million people.

When the show closes on 31 May 2014, it will have been performed at the Dominion an astonishing 4600 times. Co-creators Brian May, Roger Taylor and Ben Elton had this to say: “We want to thank every one of the many hundreds of incredible musical theatre artists, musicians and crew with whom we’ve had the privilege of working at the Dominion since 2002. And of course the incredible audiences who have rewarded them with over four and a half thousand standing ovations!”