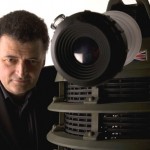 Executive Producer Steven Moffat will be a guest on Graham Norton’s Radio 2 show on Saturday, 23rd April, just a few hours before the launch of the new series.
Moffat will be on the show around 1130 UK Time.
Radio 2 is available worldwide on the BBC iPlayer.

Graham is asking for emails to put to Moffat during the programme, which can be sent to graham.norton@bbc.co.uk