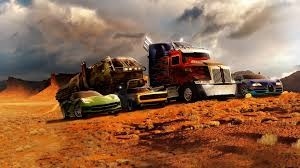 Ever since Avengers hit big at the box office every studio wants it’s own version of Avengers.
Marvel are doing what they do and DC are following suit with the Justice League. Fox are contemplating a X-Men/Fantastic Four movie and Sony are bulking up their Spider-Man franchise.
Until the bubble bursts, characters you own the rights to meeting up is like printing your own money.

Total Film sat down Lorenzo di Bonaventura, who is the producer behind Transformers and G.I. Joe and asked if we could ever see a cross-over.
He said:

“I don’t think they’ve run out of stories yet.
I think later on there’s a possibility. But I don’t think in the near future at all. It’s not something we talk about either. There’s a lot more story to be told in both cases. And I think if at some moment we think, you know what, it’s time to bring the two of them together, we’ll do that. But I think they’re strong enough to exist on their own.”