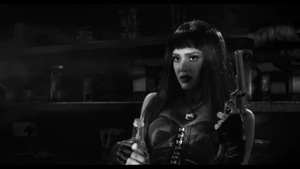 A new trailer has been released for Robert Rodiguez and Frank Miller’s highly anticipated sequel, Sin City: A Dame to Kill For.
The movie has been in development for just under a decade and when the movie is released in August, it will have been ten years since the first film was released.
The film stars Joseph Gordon-Levitt, Eva Green, Mickey Rourke, Ray Liotta, Rosario Dawson, Josh Brolin, Jessica Alba and many many more.