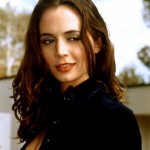 More details about the online spin-off TORCHWOOD: WEB OF LIES have been confirmed.
The series will be made up of ten three-minute animated episodes written by Jane Espenson and Ryan Scott. They will feature Eliza Dushku in a lead role.

It is not yet known if the series will be restricted to America only.