Torchwood writer Jane Espenson, announced on twitter today that an online Torchwood spin-off is in the works.
The spin-off is entitled Torchwood: Web of lies.

She said “There is going to be Torchwood web content. So in addition to the television series, there is Torchwood: Web of Lies. Enjoy all the brands!”

Espenson also hinted that Eliza Dushku will star in the online series.

She added “We have faith in Torchwood: Web of Lies,” she said. “It’s tru; there’s an echo of my past work in this”. 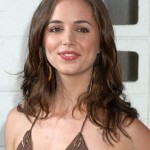