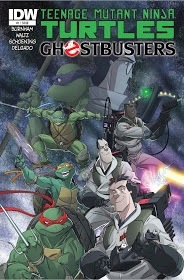 Here’s a cross-over if didn’t see coming.
Comic publisher IDW are working on a cross-over between The Ghostbusters and The Ninja Turtles.

The story revolves around the Turtles being accidentally transported to an alternate universe after an invention of Donnie’s goes wrong.
The turtles and the Ghostbusters soon team up to defeat something that followed the turtles through..

The crossover is written by Tom Waltz and Erik Burnham. Both are no strangers to IDW, Waltz has written for the Turtles series and is the editor on IDW’s Ghostbusters series.
Burnham is a writer on that series and also co-wrote the excellent Teenage Mutant Ninja Turtles: The Secret History of The Foot Clan.

“A couple of years ago, Tom Waltz and I chatted like the fans we are about how insanely fun this crossover would be if we ever got the chance to write it.
As I sit here today, my excitement level is at eleven.”

Tom Waltz added:
“Being as deeply entrenched in both properties as we are gives us a unique perspective on how to bring them together. And what better time to do it than during the combined 30th year anniversary celebration?”

The four-issue series is launched in October.