With filming well underway for the forthcoming BBC One Drama The Musketeers, the first official image of the cast together has been released.

The series is written by Adrian Hodges, it charts the fortunes of The Musketeers, an elite band of soldiers operating in seventeenth century Paris. The Musketeers D’Artagnan (Luke Pasqualino), Athos (Tom Burke), Aramis (Santiago Cabrera) and Porthos (Howard Charles) fight for what is just, and are heroes in the truest and most abiding sense -men we can trust and believe in to do the right thing, regardless of personal risk.

Adrian Hodges, Creator of the series, said: “The four actors look brilliant together and it seems like they have been working together for years. The camaraderie between them makes each action-packed scene exciting and authentic, and the image we have released today really encapsulates that.”

The 10-part drama (10×60) for transmission in 2014 is a BBC Drama Production for BBC One, co-produced by BBC WorldWide and BBC America. Jessica Pope is the BBC executive producer, Adrian Hodges is an executive producer and lead writer, and Colin Wratten is producer. 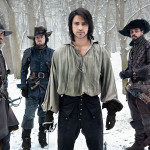 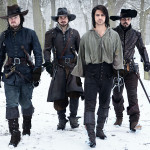 Thanks to BBC pictures for the images.