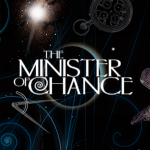 The story so far: as nations brandish an odd mix of cavalry and rocketry at each other, scientists, nobles and the mysterious Minister (Julian Wadham) all vie for control of this strange world’s future. The nation of Tanto is in the hands of Durian (Paul McGann), whose homeland is far more industrialised. This doesn’t impress Lord Rathen (Paul Darrow) in the slightest; he clearly knows far more than he’s letting on.

In general, however, education is kept from the populace; insurgent Professor Cantha (Jenny Agutter) works to restore it. Will the Minister get Cantha’s protogé Kitty (Lauren Crace) killed before she can benefit?

Hear Tamsin Greig (Black Books, Green Wing, Doctor Who) as she joins the cast in this new trailer for Episode 3: Paludin Fields. The first two episodes are available for free at ministerofchance.com.