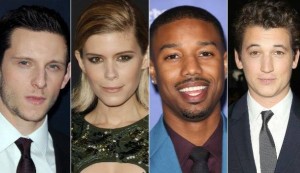 The main four have been announced for Fox’s upcoming reboot of the fantastic four franchise.

Interestingly, the studio have gone with a younger cast. Which, given their plans for a shared universe with the X-Men films actually makes sense.

The casting of Michael B Jordan has sent racists in a stir. People seem to be forgetting that the previous Sue and Johnny Storm were played by actors of different races.

Jordan has proved himself with amazing performances in projects such as The Wire and Chronicle.
There is nothing about Johnny Storm  as a character that dictates that he must be white, he’s ethnicity isn’t important.

There was a point where people scoffed at the fact that the 5ft 3″ Canadian Wolverine, was to be played by a 6ft 4″ Australian musical theater actor. At the time his present contract ends, that 6ft 4″ Australian will have played Wolverine for twenty-two years.

Fantastic Four has a worldwide release date of 18 June 2015.

What do you think of the new Fantastic Four? Let us know below.