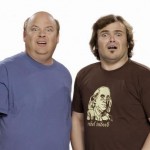 and roll to the UK later this year, with tickets for their Brighton Centre gig on Thursday 18th October 2012 now on sale.

The tour follows their Top Ten album ‘Rize Of The Fenix’, which hit the UK No.2 spot in May of this year. The four-date tour kicks off in Brighton on 18 October 2012 and close on 24 October, 2012 at London’s Hammersmith Apollo.

Earlier this year, Jack Black declared ‘Rize Of The Fenix’ better than Jack White’s ‘Blunderbuss’ – as well as many other big name artists’ recent releases.

“I do love [Jack White’s] ‘Blunderbuss’, I love the Foo [Fighters], I love Tom Waits, his new record is incredible… and Goyte… but our album is better than all of those, and because we’re clowns, we don’t get that kind of love,” said Black in an interview with Reuters in May, 2012. “In a hundred years’ time, no-one will remember Gotye or the rest, but the shining beacon of The D – they’re going to start religions after us.”

For more information or to book tickets for the Brighton Centre please visit www.brightoncentre.co.uk