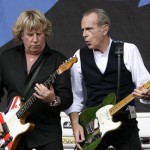 our was a massive success and the band are delighted to be joined by a very special guest [to be announced shortly!] on all dates and also, at Cardiff, Birmingham and London, by the legendary Bonnie Tyler.  This killer line-up is not to be missed and is sure to be the ultimate musical Christmas party.  Tickets are on sale from 0900 on Friday 6 July from www.ticketmaster.co.uk.

Status Quo themselves need no introduction: more hit singles than any other band, more hit albums than The Beatles, more appearances on TOTP than any other act; the superlatives keep coming.  Their latest single “The Winner” has been placed on the BBC Radio 2 playlist, the fifth consecutive single from recent album “Quid Pro Quo” to achieve that feat, and is available from iTunes from 2 July.  Bonnie Tyler is the powerhouse vocalist known for such gigantic hits as ‘Total Eclipse of the Heart’, ‘Holding Out For A Hero’, ‘It’s A Heartache’ and more.  These rare UK performances are going to be a real treat.

The Status Quo “QuoFestive” set will feature, of course, a slew of massive hits from that amazing catalogue of classics, plus some new tracks from their latest Top Ten album “Quid Pro Quo”, which has just been awarded a BPI Silver Sales disc.  Add into that our special guest and a host of hits from Bonnie Tyler and “QuoFestive” represents an evening of over 3 hours of entertainment that would put a smile on even Ebeneezer Scrooge’s face.  It’s a Christmas cracker.