The first poster for JJ Abrams’ sequel to 2009’s Star Trek has been released and surprisingly, it looks nothing like the poster for a Star Trek movie. Are they trying to trick an unsuspecting mainstream audience to a film called “into darkness”?.
The film will be released on May 17, 2013. The first trailer will run before screenings of The Hobbit: An Unexpected Journey, which opens this month.

Chris Pine, Zachary Quinto, Zoe Saldana and Simon Pegg are all reprising their roles. British actors Benedict Cumberbatch and Noel Clarke have joined the cast. Cumberbatch is playing the villain, while Clarke is playing a family man. 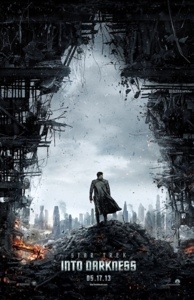