Calling all Trekkies – Star Trek: The Next Generation® – The Next Level, from Paramount Home Entertainm 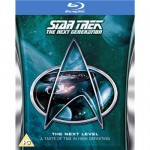 ent and CBS Home Entertainment, will be beaming up on a single Blu-ray disc on 30th January 2012 to give fans a taste of the iconic series to be released in HD later this year.

One of the most popular series in the Star Trek franchise, Star Trek: The Next Generation® celebrates its 25th anniversary in 2012. It premiered in first-run syndication during the week of September 28, 1987 and ran through 1994.

The disc will take fans aboard the Starship Enterprise with Captain Jean-Luc Picard and his crew and includes the feature-length pilot – “Encounter at Farpoint” – as well as two more “fan favourite ” episodes, “The Inner Light” (Season 5) and “Sins of the Father” (Season 3). The single Blu-ray disc will be available for a suggested retail price of £9.99.

All 178 episodes from seven seasons will be transferred to true high-definition 1080p for release over the next two years on Blu-ray.

Star Trek: The Next Generation® won numerous accolades, including 18 Emmy® awards, and was the first – and only – syndicated television show to be nominated for the Emmy® for Outstanding Drama Series for its seventh season.  It was also ranked #46 on TV Guide’s 50 Greatest TV Shows of All Time list in 2002.

Transferring Star Trek: The Next Generation® to high-definition presented numerous challenges – The series was originally shot on film and then transferred to videotape, which was used to edit episodes together.  In order to create true HD masters, CBS is going back to the original uncut film negative – all 25,000 plus film reels of it – and cutting the episodes together exactly the way they originally aired. The visual effects were all shot on film and will be painstakingly recompositioned, not upconverted from videotape. The newly cut film will then be transferred to true high-definition with 7.1 DTS Master Audio. Denise and Mike Okuda are consulting on the project.