Soho House is launching the House Shorts film competition, a platform committed to discovering and developing the 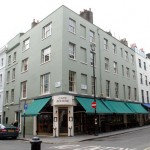 next generation of film makers from the UK, USA and Germany. The competition’s second year, supported by Bombay Sapphire and BAFTA, will feature an illustrious panel of judges including Harvey Weinstein, Paul Haggis, Jessica Chastain and current House Shorts winner Sean Gray.

Ten film maker finalists will be given the chance to make a funded ‘House Short’ film over the summer of this year, before travelling to New York this autumn where one will be crowned overall winner of the competition. The winner of House Shorts 2012 will receive internationalSoho House membership, plus a series of ‘money can’t buy’ private mentoring sessions with each of the esteemed judging panel, providing guidance that will potentially help shape their career. They will also benefit from international exposure, as their film will be screened across all Soho House cinemas worldwide, and receive support from the House Shorts Industry partners; BAFTA (particularly with promotion through guru.bafta.org), The Hollywood Reporter and Bombay Sapphire.

Soho House launched the House Shorts competition in 2010 with the aim of encouraging emerging talent in film. Since winning in 2010, Sean Gray has been working on the acclaimed US TV series Veep, the new series of In The Thick Of It as well as his own BBC radio show iGod. This year’s successful finalist will be well placed to enjoy similar success.

The theme for this year’s films is ‘Imagination’.  Aspiring film makers should submit a 400-word pitch for a two-minute film, which must reflect the theme, and be set and shot in one of the international Soho Houses. Entries must be submitted via www.houseshorts.com by 13th July 2012.

10 selected finalists will receive funding of £5,000 to make their short film, with the winner chosen by a panel of industry experts from across the globe, including:

Nick Jones said of the project: “Our first Shorts competition was fantastic; the finalists truly brought our Houses to life with their submissions and we have very proudly watched Sean’s success. This year we hope to raise the bar even higher, adding our two new Soho House properties as locations and a powerful panel of inspiring and of the moment judges.”