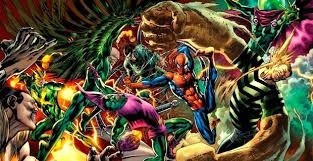 It’s rumoured that Sony are cancelling their plans for the sinister six.
I can’t say I’m surprised, 2+hrs of six villains smashing shit up was always going to be difficult to pull off.

If Sony really want an Avengers type movie, they should just talk to Marvel and get spider-man in Avengers 3. I know, I know. They can’t decide who would get to keep the money from lunch box sales. But, here’s the solution. Spider-Man appears in Avengers 3, Marvel keep the money. Then, one or two of the Avengers appear in The Amazing Spider-Man 4 and Sony keep the money.
Alternatively they could introduce the multiverse and have Toby Maquire and Andrew Garfield team up for a movie.
Marvel and Sony have a great relationship, at least it’s better than Marvel and Fox. Marvel haven’t allowed Fox the rights to X-Men toys since X-Men 2.