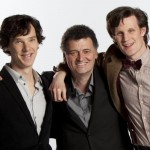 Writers Mark Gatiss and Steven Moffat along with exec producer Sue Venture were present at the Edinburgh Television Festival to pick up an award for Best Terrestrial Programme.

Earlier in the year the show picked up a BAFTA.

The second series is currently filming and is expected to air early next year.