Are you ready to rock!? “Rock of Ages” arrives onto Blu-ray, DVD and Digital Download on 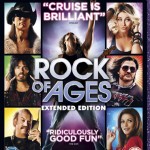 8 October from Warner Home Video. Based on the hit Broadway musical and featuring the heart-pounding hits of Def Leppard, Foreigner, Journey, Poison, REO Speedwagon, Twisted Sister and more, “Rock of Ages” is a love story that celebrates big dreams and loud drums. The Blu-ray features the extended edition, with over 13 additional minutes of more songs, more dancing and more laughs.

Extended cut (+13m of footage)
“Legends of The Sunset Strip” – Rockstars Def Leppard, Poison, Whitesnake, Foreigner, Twisted Sister, Bon Jovi and many more relive the music and vibe of the extraordinary Sunset Strip.
“Defining a Decade” – Julianne Hough, Diego Boneta, Russell Brand, Tom Cruise, Mary J. Blidge, Catherine Zeta-Jones, director Adam Shankman and others to show us inside the world of the late ’80s!
The ’80s Look- a look at the flawlessly researched and spellbinding look of Rock and Roll in the ’80s.
It’s All About The Moves – Adam Shankman and Mia Michaels show us the choreography and the moves.
The Sunset Strip- Recreate the Hollywood sign and the Sunset Strip of the 80’s.
The Tease- How to Hair. 80’s style.
Raising the Bar – A look at the historical significance of the real “Sunset Strip”
Clubs in the ’80s and how they shaped the design of the “Bourbon Room” in the movie.
Connection to the Music – the cast talk about their personal connection with the music of “Rock of Ages”.
So It Started In A Bar- the story behind the creation of the five-time Tony nominated, Broadway phenomenon “Rock of Ages”.
“Any Way You Want It” – Music Featurette