Some casting news has surfaced regarding the Canadian spin-off to Primeval. It’s been reported that The Vam 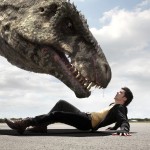 pire Diaries actress Sara Canning and Niall Matter from 90210 will star in New World, whilst Andrew-Lee Potts from the original UK series will reprise his role as Connor in the capacity of guest star.

Canning will play a predator attack expert, while Matter is an inventor.

The Canadian drama is Canada-UK co-production it will use characters from the original series, whilst inserting new Canadian characters and story-lines. This isn’t a remake it’s a spin-off. I’m fascinated by this idea and can’t help but wish starz had gone down this route with Torchwood.

Primeval:New World will consist of 13 episodes and will air on Canada’s Space cable channel.