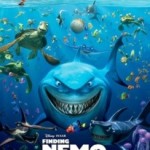 The much loved underwater animation features the unforgettable Marlin, his forgetful friend Dory and the lovable young Nemo as they return to the big screen making a splash in spectacular 3D. Director Andrew Stanton says that the 3D version of the film is breathtaking-literally. “Watching the first few scenes from ‘Finding Nemo’ in 3D was like I’d never seen a 3D movie before,” says Stanton. “It took my breath away. It felt like I was more underwater. It makes the scary moments scarier. It makes the beautiful moments more beautiful. It really drops you deeper into the story. It just amplifies everything.”

Follow the momentous journey as never seen before in 3D as an overprotective clownfish named Marlin (voiced by ALBERT BROOKS) and his young son Nemo (ALEXANDER GOULD) become separated in the Great Barrier Reef when Nemo is unexpectedly taken far from his ocean home to a fish tank in a dentist’s office. Buoyed by the companionship of Dory (ELLEN DEGENERES), a friendly-but-forgetful blue tang fish, Marlin embarks on a dangerous trek and finds himself the unlikely hero of an epic effort to rescue his son. Teeming with memorable comedic characters and heartfelt emotion, this awe-inspiring adventure was first released in cinemas in 2003 and won an Oscar® for ‘Best Animated Feature Film’.

So “grab shell dude” and “just keep swimming” in the search for P. Sherman, 42 Wallaby Way as the remarkable journey comes to cinemas in 3D in March, and remember “fish are friends, not food!”

Finding Nemo 3D is out in the UK, on the 29th of this month.

Check out the trailer below.