Twentieth Century Fox have released a new Poster for the upcoming DreamWorks animation, The Croods. The film is a prehistoric comedy adventure that follows the world’s first family as they embark on a journey of a lifetime when the cave that has always shielded them from danger is destroyed. Traveling across a spectacular landscape, the Croods discover an incredible new world filled with fantastic creatures — and their outlook is changed forever. The Croods features the voices of Nicolas Cage, Ryan Reynolds and Emma Stone. As you’re well aware, we’re huge fans of Ryan Reynolds, check out this interview we did with Eve Myles, about the man himself. The film hits UK cinemas on March 22nd 2013. Click on the image to enlarge. 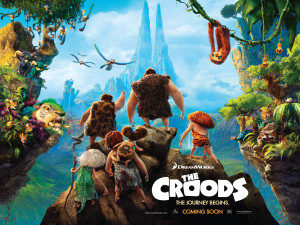