Mark Sheppard is to join t 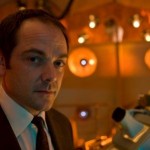 he stellar cast at the Official Doctor Who Convention taking place on the 24th and 25th March at Cardiff’s Millennium Centre.  Sheppard was an instant hit with fans playing the role of Agent Canton Delaware III in the opening episodes of Series 6 The Impossible Astronaut and Day of the Moon, helping the Doctor to eliminate one of his creepiest foes  – The Silence.

Sheppard said: “I grew up watching Doctor Who, and the fans are a huge part of what really makes the show so very special. I can’t wait to come back to Cardiff for this unprecedented behind-the-scenes event – a unique chance for fans to meet the amazing people responsible for so much of the show we all love and get to experience their talent and creativity in a totally new way”

Also announced as joining the Convention line up today are: Nick Briggs, voice of the Daleks; Neil Gorton, A Director of effects specialist MillenniumFX; Ian McNeice who appeared as Winston Churchill in the Doctor Who episodes The Wedding of River Song; The Pandorica Opens; Victory of the Daleks and The Beast Below; and Raquel Cassidy who played Cleaves in The Almost People and The Rebel Flesh.

They join  a host of cast and crew appearing at the Official Doctor Who Convention including: Matt Smith; Steven Moffat; Arthur Darvill; Danny Hargreaves; Tom MacRae;  Barnaby Edwards; Caroline Henry; Stephen Pehrsson; Michael Pickwoad; Andy Pryor; Gary Russell and Marcus Wilson with further announcements to follow in the next two weeks. The Convention is a full day event that will reveal the inner workings of Doctor Who, showing the journey from script to screen: Live special effects and pyrotechnic demonstrations; prosthetic masterclasses and in-depth Q & A sessions with the makers of the show will give an unrivalled glimpse into the behind-the-scenes world of Doctor Who.  For more information about the event and for tickets please visit: www.dwconvention.com.