After a mammoth journey and fabulous fan-funding campaign, Episode 3 of The Minister of Chance, ‘Paludin Fields’, will be released on Saturday 21st July. 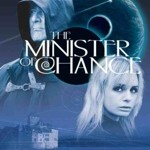 It will be slightly longer than the previous two episodes and will star the original cast of Julian Wadham, Jenny Agutter, Lauren Crace, Paul Darrow, Peter Guinness, Sylvester McCoy and Paul McGann and will also introduce new regular characters from Tamsin Greig and Beth Goddard with guest appearances from Daniel Easton, Simon Hickson and Frances Tomelty.

The first two episodes of this highly acclaimed audio drama are available currently from our website at www.ministerofchance.com , and will also be joined by the re-release of the ten minute Prologue starring Paul McGann on Saturday 14th July