The principles for ‘The Bates Motel’ have been announced and in the tradition of Brit actors playing American, we have Freddie Highmoore as a teenage Norman Bates.
A&E have picked up the series for a ten episode run. The series will be written by lost writer, Carlton Cuse and will focus on the Bates’ moving into the creepy house, after the death of Norman’s father.

The cast will also include Vera Farmiga, as Norman’s mother, Norma. Max Thieriot as Norman’s brother and Nicola Peltz as Norman’s friend.

The image below shows Freddie Highmoore as Norman and Vera Famiga as Norma Bates.

Leave your comments below. Are you intrigued? Is there a story to tell? Should they just leave it alone? 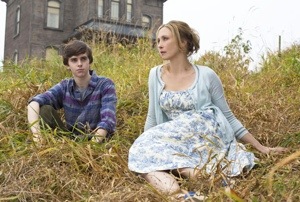