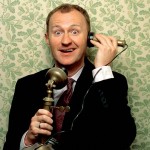 It’s been reported that Mark Gatiss will appear in episode thirteen of Doctor Who, the finale of the second half of the current series due to be broadcast later in the year.

He is one of the few people to contribute behind and in front of the camera for the series.