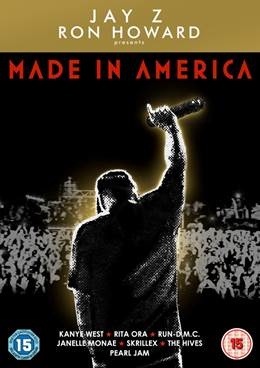 The Budweiser Made in America Festival is an annual music festival held in Philadelphia, Pennsylvania which launched in September 2012. Sponsored by Anheuser–Busch, the event features several stages that continuously host live music from a wide range of genres including hip hop, rock, pop, R&B, and EDM.

Ron Howard made his directorial debut with the 1977 comedy Grand Theft Auto, and left Happy Days in 1980 to focus on directing. His films include Cocoon, Apollo 13, How the Grinch Stole Christmas , A Beautiful Mind, which earned him the Academy Award for Best Director and Best Picture in 2002, Frost/Nixon which was Oscar-nominated and most recently Rush about the Formula One rivalry between James Hunt and Niki Lauda. In 2002, Howard conceived the idea for the Emmy and Golden Globe winning Fox/Netflix series Arrested Development.

Signature Entertainment’s Jon Bourdillon said,”We are proud to release MADE IN AMERICA in the UK. With the collaboration of great talents including Ron Howard as director and one of the world’s best-selling artists of all time, Jay-Z, it is the must-see music feature film of the year.”
www.twitter.com/MadeInAmericaUK
www.facebook.com/MadeInAmericaUK.