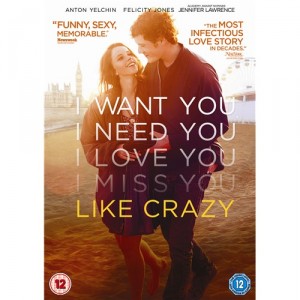 The touching, beautiful and romantic drama LIKE CRAZY debuts May 28, 2012 on DVD from Paramount Home Media Distribution.

Director Drake Doremus expertly captures the thrilling exuberance and heartbreaking fragility of first love. Featuring the incandescent Felicity Jones—who was given Breakthrough Awards by the National Board of Review and the Gotham Awards, as well as a Special Jury Prize at Sundance for her performance—and the terrifically earnest Anton Yelchin—who received a Spotlight Award at the Hollywood Film Festival and Special Recognition for a Breakthrough Performance at the Hamptons International Film Festival— LIKE CRAZY explores how a young couple faces the very real challenges of being apart…and of being together.